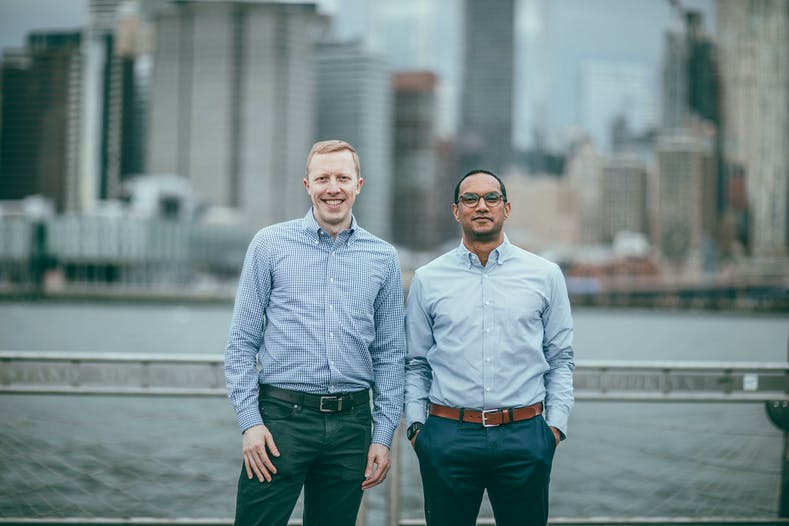 Making the decision to start a business is not an easy one, it comes with many risks and countless unknowns. We sit down with Chaz Perera and John Cottongim, Roots Automation Co-Founders, to hear what their motivations were when starting the company and what their ambitions are now.

So, where did it all begin? Despite both attending Villanova University at the same time, Chaz and John did not meet until they were both working at AIG in New York City. Their first partnerships occurred when John was leading work focused on improving the operating performance of one of the teams reporting into Chaz.

Later the two would partner again when Chaz was running the Shared Services operation of AIG and John had begun to lead a Process Automation team at the company. A shared vision started to emerge during early morning chats around ‘what could be’ in the automation space. When John left AIG and moved to Mars, these conversations continued, and it was in a coffee shop outside of New York’s City Hall that they decided to create Roots Automation.

Let’s start with Chaz, our CEO and Co-founder, a natural entrepreneur. He spent almost 15 years of his career at AIG where he was able to work across the value chain and leverage data science, behavioral science, and robotics to improve AIG’s operations.

One recurring issue Chaz encountered was a disconnect in communication between personnel in the head office and the offshore/outsourced teams overseas. His internal business partners would frequently complain that the performance of the offshore teams was well below expectations. When Chaz asked specifics, his business partners struggled to provide detail. Chaz would ask his offshore teams about the complaints and they would simply say ‘no one has complained to us so as far as we know, nothing is wrong’. The truth, as is often the case, was somewhere in the middle.

To fix these disconnects, Chaz asked his offshore teams to stop hiding behind e-mail and start speaking with these internal customers directly by phone and video chat. He asked the team to call at least five people they served each week to see if those people were satisfied with the service they received. He asked the managers on the offshore teams to start attending their internal customer’s team meetings and assume they are a part of the same team. Essentially Chaz was trying to get both teams to personalize these business relationships that were strained due to the oceans between them.

﻿Once these teams started to support one another by showing up, participating in meetings and resolving issues over the phone rather than emails, many of the frustrations went away. Both sides worked tirelessly to achieve business goals and meet customer needs. Once they supported each other, this drastically improved overall results.

So, what does this have to do with Roots Automation? Well, the ‘future of work’ involves robotics and automation. We are already seeing this becoming more commonplace in the business environment. Chaz’s vision is to provide a platform that enables unity, kinship and an ecosystem where humans and bots not only enjoy working together but depend on each other for success.

Provide a platform that enables unity, kinship and an ecosystem where humans and bots not only enjoy working together but depend on each other for success.

Moving on to John, our CTO and Co-founder, a technical expert and adept team leader. John has been involved in process automation since it was first introduced at large corporations. He has worked with industry leaders delivering these initiatives on the front line and brings a wealth of practical experience from developing and leading automation services at AIG and Mars.

John recognized early on that CFOs and COOs desire both technologically forward solutions as well as solutions that made an obvious impact to the company’s efficiency and effectiveness; all while being financially sound. By contrast, because of the limitations of corporate delivery models, many of the teams who were on the ground dealing with these bots were rarely excited to use the technology. The automations undeniably made improvements in the team’s daily schedule, but they did not take joy from their new digital solutions.

John experienced restrictions in the raw materials and corporate machinery which presented a significant limitation in how these products were brought to life. Combining these restraints with teams of consultants hired to advise on the projects resulted in a fundamental issue: a lack of consideration for user interaction and long-term possibility of the product.

John took his experience and vision as an imperative to improve on this, to utilize his knowledge and passion to create an effective solution that provides both business efficiencies and user enjoyment.

Together Chaz & John identified a gap in the market where companies outside the Fortune 500 were thirsting for robotics and automation; but they did not have the large budgets (typically $3m+ per annum) or years of time to spend trialing solutions in hopes of eventually generating a positive ROI.

With John’s technical expertise, Chaz’s business acumen and their shared vision, they decided to start a company together. Today, at Roots Automation, we are creating Digital Coworkers for our customers and making the Founders’ vision a reality for the possibilities of the future of work.

A Digital Coworker is ‘Your favorite teammate, in digital form’

Our definition of a Digital Coworker is ‘Your favorite teammate, in digital form’. We want these bots to embody great human qualities – learning by interacting with humans, adapting to changing environments, keeping open communication, and sharing learnings with others – and great bot qualities – highly efficient, accurate, scaling automatically to complete higher volumes of work.

Our dream is to have fully intuitive Digital Coworkers who support our customers’ businesses, deliver the financial value they expect and embrace the more human qualities (digital colleagues with names and personalities) that endear them to the teams on the ground.

Continue the conversation with us on Twitter and LinkedIn

Access our on-demand demo and watch as a Digital Coworker learns to underwrite an insurance policy, eventually reaching a 95% straight-through processing rate.
Take me to the on-demand demo
The Pros & Cons of Automated Underwriting Systems
Read More >
Balancing Employee Engagement and Digital Disruption with RPA
Read More >
How Does Automation Benefit the Insurance Industry?
Read More >